Deployment Rings help celebrate military service in overseas campaigns. Since the beginning of the last century the majority of families in the United States that have family members serving overseas. Americans have come to expect that at some stage their loved one will have to deploy away from home.  This will be  to defend our country and our freedom. Currently we have our troops serving in Afghanistan, Kuwait, Iraq, Africa and Korea.

What are Deployment Rings

Deployments are quite simply the movement of soldiers out of their home country, to a foreign nation or territory.  Sometimes at the request of a country whose peace and stability is threatened by a more powerful neighbour. An example of this in more recent times, was the invasion of Kuwait by Iraq. This happened in the latter part of the last century and the earlier part of the current century. The historic deployments that we read about and are probably more familiar with is the 1st World War, 2nd World War.  Vietnam, Desert Storm, Operation Iraqi Freedom and Operation Enduring Freedom are more current. Deployment Rings are designed to commemorate this campaigns. 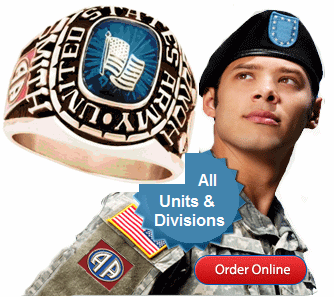 How long do Deployments last.

There are no mandatory or ideal length of any deployment. Normally troops can be deployed for periods between six months and twenty four months. Military leaders and department of defences have a lot of factors to consider when making such decisions.  These may focus on the size of units or brigades required. The weather conditions in the host country, distance to conflict zones, and of course the level of threat. Perhaps the easiest way to answer the question is, that deployments last until the mission is completed. Deployment Rings will record this with special dates and emblems. Who goes on Deployments.

If we take the current deployments such as Operation Iraqi Freedom and Operation Enduring Freedom you will observe that all departments of our defense forces have been involved. These are the Navy, the Army, the Marines and the Air Force. Of course some people we should never forget are the Reserves and the National Guard.  These  train at various times of the year to keep themselves prepared to assist our regular troops in conflict zones. Both male and female members make up our military personnel. Nobody is exempt from being deployed unless on medical grounds.

Any member of the military who for whatever reason refuses to deploy faces severe consequences.  This might be a possible prison term and a discharge from the military. There was a case in Tacoma, Washington where an Army Lieutenant who refused to deploy to Iraq.  He was with the Stryker Brigade from Fort Lewis.  He said that he believed the the whole idea of Iraq having weapons of mass destruction was completely manipulated to fit an already implemented policy prior to the attacks of 9/11.

Every soldier that serves overseas away from family and friends deserves so much respect. One way we can show our gratitude is to get them a gift that they will treasure for the rest of their lives. One of these gifts are deployment rings.