The Military Police of a country is perhaps the most important agency present in a state. For any nation to protect itself from both domestic and external threats, the role of the  police becomes crucial. Not only does a nation’s  police maintain law and order, they also carries out rescue operations in times of disaster. Trained as soldiers, the military police, along with the local law enforcement agencies, is called to duty for assistance and protection of civilians. Police are the formal law enforcement organization in America, dating back to the early twentieth century.

The U.S. Army is primarily divided into four major sectors of law enforcement. These are the Military Police Corps, the Shore Patrol which is the U.S. Navy, the Air Force Security Police, and the Marine Corps. Highly trained and well-coached military personnel are recruited to these forces.

Agencies staffed with these military personnel are mainly tasked with the duties of an ordinary police force. They are also required to carry out additional military duties as well. Specially trained soldiers are assigned with enforcement of traffic control, security, disaster control, and mobility support.

Officially established on 26 September 1941, the Military Peace Corps is today one of the youngest branches of the U.S. Army. It has shown remarkable levels of efficiency and effectiveness. Due to the fact that the police are the supreme agency that defends the sovereignty and security of the state, military personnel are coached in area security operations.

Duties cover anti-terrorism and crime prevention functions. These forces are also allocated operations of resettlement and other police intelligence operations. The effectiveness of the crucial role of the police in area security operations is evident in the examples of Operation Just Cause and Operation Desert Shield.
.

They have been providing assistance and defending interventions since 1991, in areas like Somalia, Haiti and Bosnia. The Military police have, to a great extent, managed to maintain order in war-torn areas like Kosovo and Afghanistan.  Another notable feature of the Police Corps is that women are not left behind when it comes to recruitment in the army. Women’s Army Auxiliary Corps is an establishment that has been assigning police duties to women since as early as 1941.

Women  are given the same training as police. Personnel in the Women’s Army Corps have served similar duties as any member of the Military Police.  Crossing any gender barriers that arose during their time in the army. In today’s day and age, 25% of the Police Crops consists of women soldiers.

This mix of genders prevalent within the Corps is highly valuable and useful in war-torn areas where cultural taboos prevent male soldiers to interact with women. For example, in the wars in Iraq and Afghanistan, female soldiers were particularly important when it came to interacting and reassuring the native women of those areas where U.S. forces were deployed.

The role of the Corps can further be emphasized by looking at the high levels of expertise in police. Note the detainment, and stability operations that the military police forces have thus far carried out. These operations have been largely successful.

To summarize the role of the Military Police, it is safe to say that the U.S.  Police Corps is well equipped and highly experienced in five primary functions that the state relies on. These functions include mobility support operations, law and order operations, police intelligence operations and most area security operations.

To commemorate and honor the services of the U.S. soldiers and army men, specially designed U.S. military rings are crafted. Military rings are perfect military gifts for the U.S. Military Police Corps. Each piece is custom made for members of the army, in collaboration with the United States Military. Meticulously designed and completed with precision, these rings not only serve as mere pieces of jewelry, but are in fact constant reminders of the tremendous commitment and sacrifices that any and every member of the U.S. military has ever given. 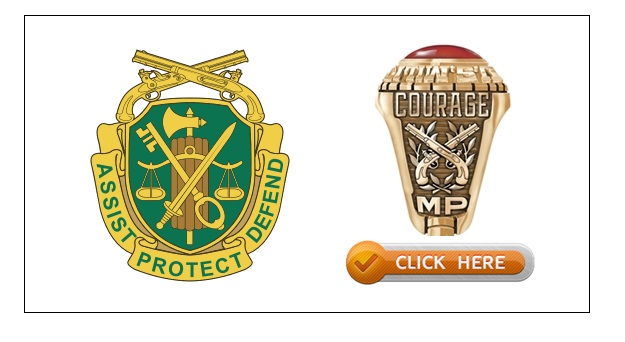