Military dogs are wonderful because they are loyal. Dogs can be trained well and contribute to the safety of our nation. Truly K9 military dogs do hold a special place in the hearts of those who train them and work with them. Especially those who work with them in the United States Military in the defence of this great nation. In fact, these dogs can be trained for various tasks. Some of the dogs become rescue dogs, some sniffer dogs and some become handling dogs., etc.

When it comes to the matter of which military dog breeds are used, most dogs tend to be German Shepherds. Dutch Shepherds are also in the mix. In addition, there is the frequent usage of Belgian Malinois. The reason why these breeds are the most prevalent ones used when it comes to military dogs is due to the fact that they hold high levels of intelligence.  They are also supremely loyal. Moreover, they are powerfully aggressive and demonstrate real athletic capabilities.

It is noted that German Shepherds hold the highest preference among those who serve in the US Military. This is because these dogs possess a truly unparalleled mix of traits.  They are moderately aggressive and easy to train.  German Shepherds are predictable, demonstrating the characteristic of dependability.  They posses a high level of intelligence and are agile in adapting to most climate conditions. Though some other breeds of dogs may manifest some or many of these desirable characteristics, the German Shepherd is the top breed that showcases all of these highly essential characteristics that are undeniably important when it comes to the service of defending the safety and freedom of the United States of America.

It will take adjustments for the trainers and dogs during the training process. Also, the ones who will be using the dogs in the service will need to adjust to the dogs. This is a fun time, but it is also a serious endeavor. This takes commitment and dedication. While the dogs are intended for serving the nation to protect its safety and freedom, it is noted that these dogs must be treated humanely and with compassion. However, one cannot take a light approach with these dogs the same way one may take with a family dog. 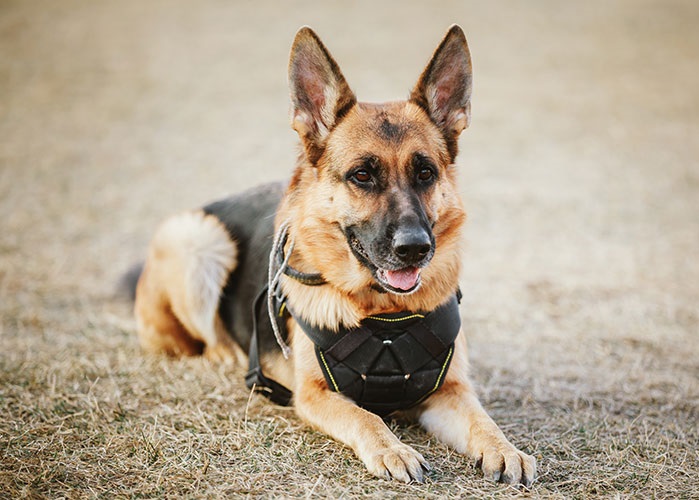 A sense of seriousness and command must be used with these dogs most of the time, though they must also be shown love and attention as well. When the seriousness and command side is kept in place with these dogs as humans interact with them, the dogs will remain seriously focused on what their aim and purpose is, even when there is the showing of love and attention during more relaxed human interaction. Many of the handlers design K9 Military Rings in honor of their canine friend.

Once trained, the military dogs will perform well. They will do as they are told. They understand their instructions and they follow through. It is not uncommon for a dog to fearlessly put its life in danger knowingly in order to protect the ones it works with. With such a sense of reliability in military dogs, they do grip a deep place in the hearts of all who interact with them. These dogs are honorable in the service that they provide concerning defending the safety and freedom of this nation.